Bacon and Eggs…Steak and Potatoes… Peas and Carrots. Some things just go together, but most people wouldn’t put tea and ice cream in that category. However, July is National Ice Cream month and is the perfect time to try a tasty new treat.

With more and more trendy frozen concoctions to choose from than ever before, it’s not uncommon to find an Earl Grey, Chai, or Matcha flavored option in your local store’s freezer section. Tea flavors tend to make the ice cream lighter tasting and more refreshing than your traditional flavors, making it the perfect option for those of us looking for a pallet cleanser instead of a full-on dessert.

Green tea is believed to be the first tea used in ice cream. Its exact origins are unclear, but the most popular theory is that it originated in Japan sometime between 1868-1912. It was not until the late 1970s that it began being served in the States, mostly in Japanese restaurants and markets.

Daring to be a little bolder than tea flavored ice cream? A tea float might be for you. Just as its predecessors, root beer and Coke mostly, tea is becoming the “it” drink to add ice cream to and unlike traditional floats, the options for flavor combinations are endless. Maybe a scoop of cinnamon in chai, or lavender in your earl grey. When it comes to combining two of the most diverse flavor spectrums, your imagination and taste buds are your only limit 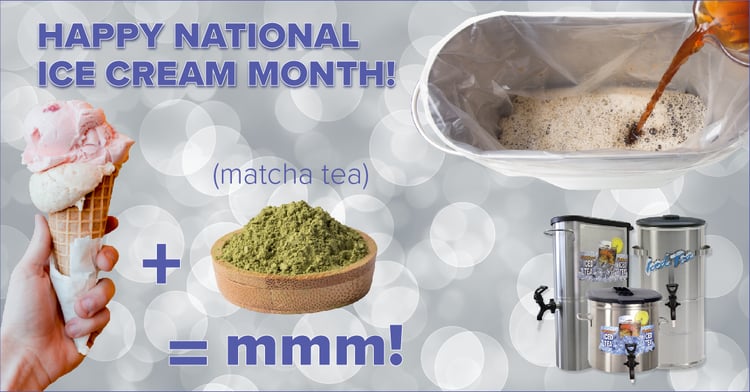 Tea and ice cream combinations are popping up all over the country in many different forms. Is your business keeping up with trends? Summertime is a great time to introduce some sweet and chilled variety to your repertoire and Plascon is here to help you bring your new ideas to life with several packaging options.  It’s easy to set up a tea float station with Saftea® Urn Liners and switching out the tea flavors with a liner means minimal cleaning time and no weird flavors left behind from the previous tea! Contact us today to learn more about Saftea® iced tea urn liners or to request your free 7-day trial of liners!