You betcha iced tea is good for you! Celebrate National Iced Tea Month!

8 examples of why tea is good for you

Have you noticed the rise in popularity of tea drinking where you live? Tea shops are popping up as often as coffee houses! But in all the years that I’ve been drinking iced tea  and hot tea, I had no idea that it might actually be having a significant impact on my health — for the better. Beyond just the charm of drinking tea, science supports the health benefits of tea.

The world consumes 8000 tons of tea every day - and each cup is a cultural journey unto itself. After water, tea is the most frequently consumed beverage in the world. Which make sense; tea goes hand in hand with images of Asia, the United Kingdom, India, Russia. According to legend, tea was invented in China in 2737 BC, when a breeze blew a tea leaf into a cup of hot water about to be consumed by Emperor Shennong. Tea arrived in Great Britain in the 1600's, originally as a medicinal drink. By the 1800's, tea was a common touch-tone among all social classes. But how about here in the United States of America? It might not seem like we have a booming tea culture, but the fact is that on any given day, more than half of the American population drinks tea. But here’s the twist: 85 percent of that tea is served on the rocks.

Regardless of the temperature it is served at, tea is chock full of good things. There has been much research done, and compelling conclusions that tea can reduce the risk of heart disease, and possibly even help prevent a number of others. In warmer weather, having your tea iced is a great way to reap the benefits all year. Whether black, green, white or oolong – all of which come from the same plant, just processed differently – all teas do a body good. Here are a few of the ways in which they do so (with the caveat that you aren’t drinking tea drenched in sugar).

You can make iced tea by brewing tea traditionally and then adding ice or allowing it to cool. You can use any type of tea – or herbal tea. Go crazy! Mix things up, how about adding lemon, mint and ginger to black tea? Peaches and lime to white tea? Raspberries and orange slices would go beautifully with Earl Gray. Have a tea free-for-all ... and reap the many benefits along the way. Few things can compare to sitting out on the porch at the end of a long summer day with a cold glass of iced tea. When it comes to a healthy beverage that will satisfy your thirst, look no further than unsweetened iced tea. 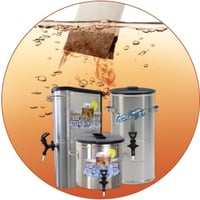 Restaurants offering fresh brewed iced tea are also switching to Saftea® Liner to ensure optimum freshness, quality and safety in the iced tea served to their patrons.  Saftea® Liner is used in stainless steel tea urns commonly found at restaurants, cafes, and convenient stores, and ensures the highest quality and freshness in fresh brewed iced tea.  Residual tea can become trapped in the urn or spigot, which can then build up forming harmful mold and bacteria.  Using Saftea® Liner eliminates this issue since the tea never comes in direct contact with the tea urn.  Switching liners is quick simple, and as an added bonus, no funky aftertaste from residual cleaning chemicals!